Wonder Woman is a 2017 American superhero film based on the DC Comics character of the same name, produced by DC Entertainment in association with rat PAC Entertainment and Chinese company Ten cent Pictures, and distributed by Warner Bros. Pictures. It is the fourth installment in the DC Extended Universe (DCEU).Directed by Patty Jenkins from a screenplay by Allan Heinberg and a story by Heinberg, Zack Snyder, and Jason Fuchs, Wonder Woman stars Gal Godot in the title role, alongside Chris Pine, Robin Wright, Danny Huston, David Thewlis, Connie Nielsen, and Elena Anaya. It is the second live action theatrical film featuring Wonder Woman following her debut in 2016’s Batman v Superman: Dawn of Justice.In Wonder Woman, the Amazon princess Diana sets out to stop World War I, believing the conflict was started by the longtime enemy of the Amazon’s, Ares, after American pilot and spy Steve Trevor crash-lands on their island Themyscira and informs her about it. 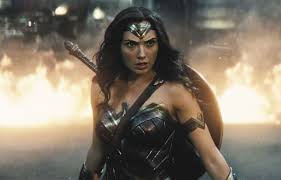 Development of a live action Wonder Woman film began in 1996, with Ivan Reitman slated to produce and possibly direct. The project floundered in development hell for many years; Jon Cohen, Todd Alcott, and Joss Whedon, among others, were also attached to the project at various points. Warner Bros. announced the film in 2010 and Jenkins signed on to direct in 2015. Inspiration for Wonder Woman was drawn from Wonder Woman creator William Moulton Marston’s 1940s stories and George Perez’s 1980s stories about Wonder Woman, as well as the New 52incarnation of the character. Principal photography began on November 21, 2015, with filming taking place in the United Kingdom, France, and Italy before finishing on May 9, 2016, the 123rd anniversary of Marston’s birth. Additional filming took place in November 2016.

Wonder Woman had its world premiere in Shanghai on May 15, 2017, and was released in the United States on June 2, 2017, in 2D, Real D 3D, and IMAX 3D by Warner Bros. Pictures. The film received largely positive reviews, with praise for its direction, acting, visuals, action sequences, and musical score, although the portrayal of its villains received some criticism. The film set numerous box office records; it is the 8th-highest-grossing superhero film domestically and 24th-highest-grossing film in the United States. It grossed over $821 million worldwide, making it the tenth highest a grossing film of 2017. It also helped the DCEU to push past $3 billion at the worldwide box office, making it the fourteenth-highest-grossing film franchise of all time. As of August 2018, Rotten Tomatoes has listed the movie as No. 3 on its list of the “Best Superhero Movies of All Time”,and the American Film Institute selected it as one of the top 10 films of 2017.The film received three nominations at the 23rd Critics’ Choice Awards, winning Best Action Movie. A sequel, Wonder Woman 1984, is scheduled to be released on June 5, 2020, with Jenkins returning as director and Godot reprising her role.