The yellow-tailed black cockatoo (Calyptorhynchus funereus) is a large cockatoo native to the south-east of Australia.

The yellow-tailed black cockatoo is found in forested regions from south and central eastern Queensland to southeastern South Australia including a very small population persisting in the Eyre Peninsula. 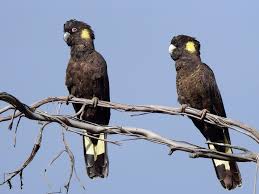 Measuring 55–65 cm (22–26 in) in length , It has a short crest on the top of its head. Its plumage is mostly brownish black and it has prominent yellow cheek patches and a yellow tail band. The body feathers are edged with yellow giving a scalloped appearance. The adult male has a black beak and pinkish-red eye-rings, and the female has a bone-coloured beak and grey eye-rings.

Yellow-tailed black cockatoos are diurnal, raucous and noisy, and are often heard before being seen. They make long journeys by flying at a considerable height while calling to each other, and they are often seen flying high overhead in pairs, or trios comprising a pair and their young, or small groups. Outside of the breeding season in autumn or winter they may coalesce into flocks of a hundred birds or more, while family interactions between pairs or trios are maintained. They are generally wary birds, although they can be less shy in urban and suburban areas. They generally keep to trees, only coming to ground level to inspect fallen pine or banksia cones or to drink. Flight is fluid and has been described as “lazy”, with deep, slow wingbeats. 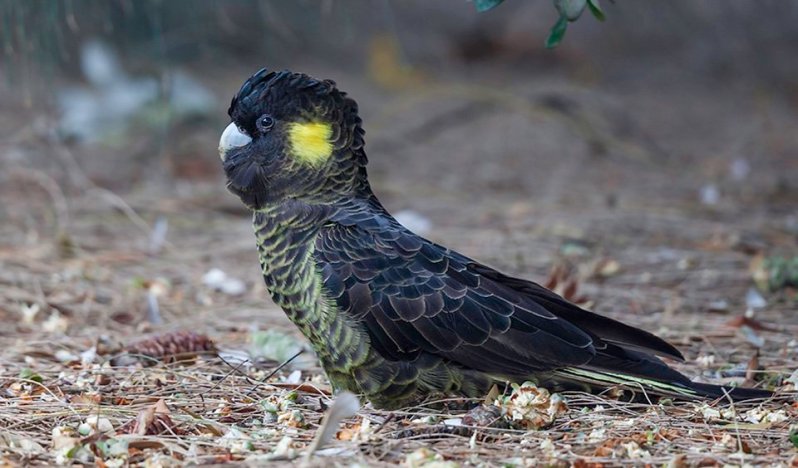 The diet of the yellow-tailed black cockatoo is varied and available from a range of habitats within its distribution, which reduces their vulnerability to degradation or change in habitat. Much of the diet comprises seeds of native trees, particularly she-oaks .They are also partial to pine cones. In the Eyre Peninsula, the yellow-tailed black cockatoo has become dependent on the introduced Aleppo pine.