First aid is the first and immediate assistance given to any person suffering from either a minor or serious illness or injury,with care provided to preserve life, prevent the condition from worsening, or to promote recovery. It includes initial intervention in a serious condition prior to professional medical help being available, such as performing cardiopulmonary resuscitation (CPR) while waiting for an ambulance, as well as the complete treatment of minor conditions, such as applying a plaster to a cut. First aid is generally performed by someone with basic medical training. 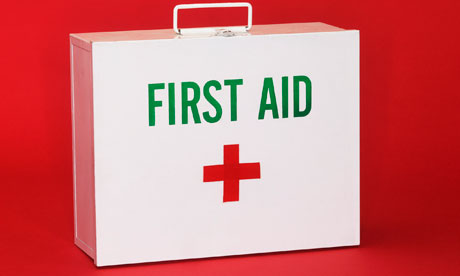 The primary goal of first aid is to prevent death or serious injury from worsening. The key aims of first aid can be summarized with the acronym of ‘the three Ps’:

The overriding aim of all medical care which includes first aid, is to save lives and minimize the threat of death.

Prevent further harm also sometimes called prevent the condition from worsening, or danger of further injury, this covers both external factors, such as moving a patient away from any cause of harm, and applying first aid techniques to prevent worsening of the condition, such as applying pressure to stop a bleed becoming dangerous.

First aid also involves trying to start the recovery process from the illness or injury,and in some cases might involve completing a treatment, such as in the case of applying a plaster to a small wound.It is important to note that first aid is not medical treatment and cannot be compared with what a trained medical professional provides. First aid involves making common sense decisions in best interest of an injured person.Another set of goals for keeping a badly hurt person alive is sometimes called “ABCs”.

In case of tongue fallen backwards, blocking the airway, it is necessary to hyperextend the head and pull up the chin, so that the tongue lifts and clears the airway.Certain skills are considered essential to the provision of first aid and are taught ubiquitously. Particularly the “ABC”s of first aid, which focus on critical life-saving intervention, must be rendered before treatment of less serious injuries. ABC stands for Airway, Breathing, and Circulation. The same mnemonic is used by emergency health professionals. Attention must first be brought to the airway to ensure it is clear. Obstruction (choking) is a life-threatening emergency. Following evaluation of the airway, a first aid attendant would determine adequacy of breathing and provide rescue breathing if necessary.

Assessment of circulation is now not usually carried out for patients who are not breathing, with first aiders now trained to go straight to chest compressions (and thus providing artificial circulation) but pulse checks may be done on less serious patients.

To save a person’s life, you need to have an open airway so it makes a clear passage where air can go through the mouth or nose through the pharynx and down into the lungs, without obstruction. Conscious people will maintain their own airway automatically, but those who are unconscious (with a GCS of less than 8) may be unable to maintain a patent airway, as the part of the brain which automatically controls breathing in normal situations may not be functioning.

If the patient was breathing, a first aider would normally then place them in the recovery position, with the patient leant over on their side, which also has the effect of clearing the tongue from the pharynx. It also avoids a common cause of death in unconscious patients, which is choking on regurgitated stomach contents. 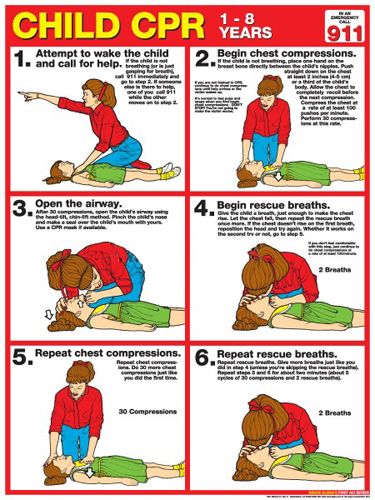 If the choking person is an infant, the aide will give five strong blows in the infant’s upper back by placing the infant’s face down on his forearm. The aide will be taught not to provide first aid if the infant is able to cough or cry. Coughing and crying indicate the airway is open and the foreign object will likely to come out from the force the coughing or crying produces.

A first aid kit consists of a strong, durable bag or transparent plastic box. They are commonly identified with a white cross on a green background. A first aid kit does not have to be bought ready-made. The advantage of ready-made first aid kits are that they have well organized compartments and familiar layouts.