A refrigerator (colloquially fridge) consists of a thermally insulated compartment and a heat pump (mechanical, electronic or chemical) that transfers heat from the inside of the fridge to its external environment so that the inside of the fridge is cooled to a temperature below the ambient temperature of the room. Refrigeration is an essential food storage technique in developed countries.

The lower temperature lowers the reproduction rate of bacteria, so the refrigerator reduces the rate of spoilage. A refrigerator maintains a temperature a few degrees above the freezing point of water.

Optimum temperature range for perishable food storage is 3 to 5 °C (37 to 41 °F).A similar device that maintains a temperature below the freezing point of water is called a freezer. The refrigerator replaced the icebox, which had been a common household appliance for almost a century and a half. 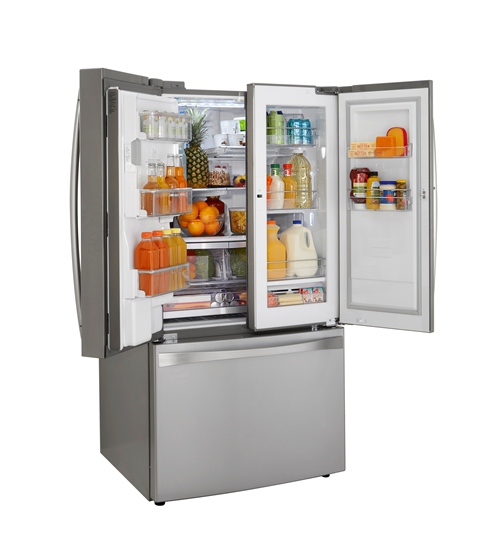 The introduction of Freon in the 1920s expanded the refrigerator market during the 1930s. Home freezers as separate compartments (larger than necessary just for ice cubes) were introduced in 1940. Frozen foods, previously a luxury item, became commonplace.

Freezer units are used in households and in industry and commerce. Commercial refrigerator and freezer units were in use for almost 40 years prior to the common home models.

The freezer-on-top-and-refrigerator-on-bottom style had been the basic style since the 1940s, until modern refrigerators broke the trend.

A vapor compression cycle is used in most household refrigerators, refrigerator–freezers and freezers. Newer refrigerators may include automatic defrosting, chilled water, and ice from a dispenser in the door.

Domestic refrigerators and freezers for food storage are made in a range of sizes. Among the smallest are Peltier-type refrigerators designed to chill beverages.

A large domestic refrigerator stands as tall as a person and may be about 1 m wide with a capacity of 600 L. Refrigerators and freezers may be free-standing, or built into a kitchen. The refrigerator allows the modern household to keep food fresh for longer than before. Freezers allow people to buy food in bulk and eat it at leisure, and bulk purchases save money.