The golden poison frog (Phyllobates terribilis), also known as the golden frog, golden poison arrow frog, or golden dart frog, is a poison dart frogendemic to the Pacific coast of Colombia. The optimal habitat of P. terribilis is the rainforest with high rain rates (5 m or more per year), altitudes between 100 and 200 m, temperatures of at least 26 °C, and relative humidity of 80–90%. In the wild, P. terribilis is a social animal, living in groups of up to six individuals; however, captive P. terribilis specimens can live in much larger groups. These frogs are often considered innocuous due to their small size and bright colours, but wild frogs are lethally toxic.

The golden poison frog is endemic to humid forests of the Pacific coast of colombia in the cauca and valle del cauca department. Its range is less than 5,000 square km. It is only known from primary forest. The eggs are laid on the ground; the males transport the taptoad to permanent pools. 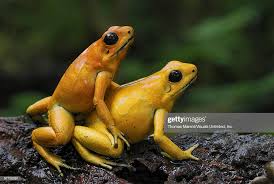 P. terribilis is the largest species of poison dart frog, and can reach a size of 55 mm as adults, with females typically being larger than males. Like all poison dart frogs, the adults are brightly colored, but they lack the dark spots present in many other dendrobatids. The frog’s colour pattern is aposematic(which is a warning coloration to warn predators of its toxicity). The frog has tiny adhesive disks on its toes, which aid climbing of plants. It also has a bone plate in the lower jaw, which gives it the appearance of having teeth, a distinctive feature not observed in the other species of Phyllobates. The frog is normally diurnal. P. terribilis occurs in three different color varieties or morphs:

The largest morph of P. terribilis exists in the La Brea area of Colombia, and is the most common form seen in captivity. The name “mint green” is actually rather misleading, as the frogs of this morph can be metallic green, pale green, or white.

The yellow morph is the reason it has the common name golden poison dart frog. Yellow P. terribilis specimens are found in Quebrada Guangui, Colombia. These frogs can be pale yellow to deep, golden yellow in color. A frog sold under the name “gold terribilis” was once believed to be a deeper yellow P. terribilis. However, genetic tests have proven these frogs to be uniform-colored morphs of Phyllobates bicolor.

While not as common as the other two morphs, orange examples of P. terribilisexist in Colombia, as well. They tend to be a metallic orange or yellow-orange in color, with varying intensity.

The golden poison frog’s skin is densely coated in an alkaloid toxin, one of a number of poisons common to dart frogs (batrachotoxins). This poison prevents its victim’s nerves from transmitting impulses, leaving the muscles in an inactive state of contraction, which can lead to heart failure or fibrillation. Alkaloid batrachotoxins can be stored by frogs for years after the frog is deprived of a food-based source, and such toxins do not readily deteriorate, even when transferred to another surface.

The golden poison frog is not venomous, but poisonous: venomous animals have a delivery method for the toxin, such as fangs or spines, while poisonous animals and plants do not have a delivery method and rely on transference of the toxin, typically by, but not limited to, ingestion. Like most poison dart frogs, P. terribilis uses poison only as a self-defense mechanism and not for killing prey.The average dose carried will vary between locations, and consequent local diet, but the average wild P. terribilis is generally estimated to contain about one milligram of poison, enough to kill about 10,000 mice. This estimate will vary in turn, but most agree this dose is enough to kill between 10 and 20 humans, which correlates to up to two African bull elephants.This is roughly 15,000 humans per gram.